Misophonia: When You Can’t Stand Every Day Noises

Does it fill you with rage when someone talks with their mouth full? Do you want to flee every time your housemate coughs? If certain noises drive you crazy while no one else seems to notice, that doesn’t mean you’re a lousy friend, spouse, coworker or family member. However, it might mean you have misophonia.

Misophonia can be an isolating experience. If you have misophonia, you might avoid certain social situations like eating around others or attending lunch meetings. Some individuals with misophonia avoid doing activities they enjoy, like going to the movies, for example, in fear of encountering sound triggers like other moviegoers munching on popcorn. While in some cases, misophonia is mild and easy to manage, it can become so severe it leads to depression or interferes with relationships, work and everyday life.

Although there is a lot yet to learn about misophonia, there is treatment available to you so you can enjoy life and not worry about annoying sounds. And, even if your family doctor has never heard of this condition, you’re not alone — it’s a lot more common than one might think and is estimated to occur in as much as 20% of the population. Many others might not realize they have misophonia or are embarrassed by the condition. In other words, it’s likely that millions of Americans have this disorder and suffer in silence.

In this post, we’ll explore misophonia further, answer frequent questions and look at treatment options. We’re also happy to help provide sound solutions the best way we know how at the Cow.

What Is the Definition of Misophonia?

Misophonia, which literally means “hatred of sound,” is a condition that causes strong emotional reactions to specific sounds. For example, someone with misophonia may experience intense anger almost instantaneously at the sound of a family member chewing at the dinner table. The person does not choose to feel that way but experiences an involuntary reaction to a specific trigger sound.

If you’ve ever felt irritated by a particular noise, it doesn’t necessarily mean you have misophonia. Most people feel annoyed by certain sounds once in a while. For example, researchers found that sounds like nails on a chalkboard and an electric drill are generally annoying to most of us. This is because these sounds fall into the frequency range where our ears are most sensitive. On the other hand, people with misophonia experience an instant surge of negative emotions in reaction to common, everyday noises. They might experience painful misophonia symptoms daily depending on the source.

If you have misophonia, you may be wondering if it’s a real condition or something you can easily control or make go away. Even though misophonia has not been studied as much as other conditions, it is a real sound sensitivity disorder that impacts mental, emotional and social health. Some individuals experience severe misophonia symptoms that affect their lives in major ways. For example, if someone can’t tolerate the sound of coworkers snacking, they might quit their job.

What Are Common Triggers for Misophonia?

This is not a complete list, as there are many more potential triggers for someone who experiences misophonia. Misophonia usually involves soft sound sensitivity, meaning sounds do not need to be loud to cause symptoms. 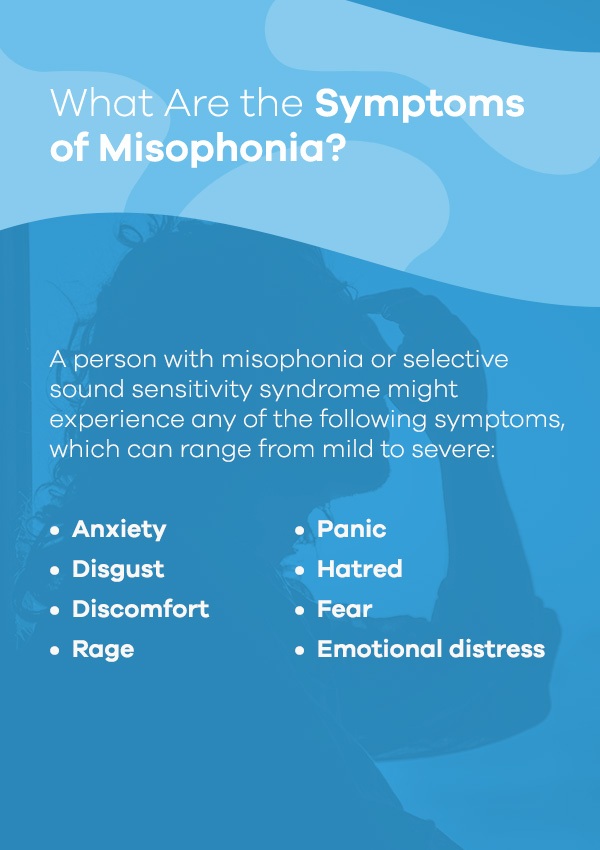 What Are the Symptoms of Misophonia?

A person with misophonia or selective sound sensitivity syndrome experiences a fight-or-flight response to specific sounds. As a result, they might experience any of the following symptoms, which can range from mild to severe:

Individuals with misophonia may also feel anxious as they anticipate encountering a trigger. For example, they might experience anxiety as dinnertime approaches, knowing they’ll have to listen to family members chew.

Doctors aren’t exactly sure what causes misophonia, but they think it’s due to both psychological and physical factors. Sometimes misophonia overlaps with other conditions such as:

Tinnitus, which is the sensation of ringing or buzzing in the ears, often coexists with misophonia. According to the American Tinnitus Association, an estimated 4% to 5% of patients with tinnitus experience some form of misophonia.

What Part of the Brain Causes Misophonia?

Another possible cause of misophonia has to do with the brain. People with misophonia may have different brain structures than those who do not experience the disorder. By studying brain scans, a research team at Newcastle University found that people with misophonia have higher myelination in their grey matter than those who do not have misophonia. Myelin is a fatty substance that boosts the speed of electrical communication between neurons, triggering a response in different brain areas and parts of the body.

They also found greater brain activity in the anterior insular cortex while subjects listened to trigger sounds. This part of the brain is responsible for fear, long-term memories and other emotions and might explain why individuals with misophonia experience a flight-or-fight response when they hear a trigger sound.

Lastly, the researchers found heightened bodily responses to triggers, such as increased heart rate and sweating. This proves the real physical discomfort someone with misophonia experiences when listening to certain sounds.

Can Misophonia Be Inherited?

Some studies suggest that misophonia runs in families. For example, a study published in the Brazilian Journal of Otorhinolaryngology explored misophonia symptoms in fifteen family members with misophonia. The subjects ranged in age from 9 to 73 years old. Ten of them reported developing misophonia symptoms during childhood or adolescence, and over 90% reported experiencing anxiety in response to sounds. Researchers concluded that misophonia may be more common than we think, and may be hereditary.

Is Misophonia a Form of Obsessive-Compulsive Disorder?

Misophonia may be common in individuals with obsessive-compulsive disorder (OCD), and many experts agree that misophonia should be categorized under disorders related to OCD in the Diagnostic and Statistical Manual of Mental Disorders (DSM). However, scientists need to conduct further research to determine if this is the most appropriate category for misophonia. While many individuals who suffer from other disorders like OCD experience misophonia, others do not have any other conditions.

Is Misophonia a Symptom of Autism?

Individuals with autism spectrum disorder (ASD) may experience heightened sensitivity to certain sounds similar to people with misophonia. However, the exact relationship between misophonia and autism is yet unknown.

Currently, researchers believe that misophonia does not co-occur with any single disorder, but rather exists with several disorders, such as OCD, autism or tinnitus, as mentioned above. More research is needed to determine whether misophonia should be classified as its own unique disorder that co-occurs with other disorders, or as a set of symptoms under a disorder.

What’s the Difference Between Misophonia, Hyperacusis and Phonophobia?

You may have come across several different terms that describe a sensitivity to sound, but they all mean very different things. First, hyperacusis is a hearing disorder that makes ordinary sounds seem intolerably loud. This is different from misophonia because individuals with misophonia are irritated by certain noises regardless of sound level.

Someone with hyperacusis may experience sounds like a running faucet or conversation far louder than they should. It’s a rare condition that affects only about one in 50,000 people, and most people who have it also have tinnitus. Hyperacusis is usually caused by a particular disease or health issue such a head injury or migraines. Sometimes, being around a loud noise or being exposed to loud noises over a long period can cause hyperacusis.

Phonophobia, also known as ligyrophobia, is a fear of loud noises. Phonophobia is most common in young children, but can also be found in adults. People with phonophobia may be afraid of sudden loud noises or ongoing noise. Phonophobia is highly treatable, and treatment depends on the level of severity. Treatment might include exposure therapy, counseling, meditation or other self-help techniques. Misophonia, on the other hand, is not a fear of sounds as much as it is an intolerance to specific sounds.

Autonomous sensory meridian response (ASMR) is a relaxing tingling sensation in the head and a feeling of euphoria some people get when they listen to certain ordinary sounds like whispering or rustling leaves. Some individuals with misophonia also have ASMR. One study, published in the Journal of Clinical Psychology, found that out of 300 individuals with misophonia, half of them also experience ASMR. This suggests that some people may be more sensitive to both pleasant and unpleasant sounds.

However, some individuals with misophonia experience ASMR sounds as triggers. Therefore, if you have misophonia and also can’t stand ASMR sounds — you’re not alone!

How to Be Diagnosed With Misophonia

Misophonia is not an official diagnosis, and some doctors may mistake misophonia for anxiety or another disorder. Researchers at the University of Amsterdam suggest that misophonia be considered a type of obsessive-compulsive disorder and propose that misophonia be diagnosed based on the following criteria:

To make a diagnosis, a doctor will need to consider trigger reactions and co-occurring conditions as well. They might use a misophonia test like the Misophonia Assessment Questionnaire or the Amsterdam Misophonia Scale. Misophonia is most likely self-diagnosed or identified by a friend or family member.

What Is the Treatment for Misophonia?

People with misophonia can also practice self-care techniques and manage symptoms on their own. This may include:

Most treatments focus on addressing a person’s emotional reactions and reducing distress, but more research is needed to find the underlying causes of misophonia. It’s also important for family members to seek support because misophonia can affect everyone.

If misophonia keeps you awake at night or makes it tough to focus, you might consider soundproofing. By soundproofing your bedroom, office or any room you need to turn into a silent refuge, you’ll always have a place to take a breather and find a sense of calm.

At Soundproofcow.com, we have soundproofing solutions to meet your needs and budget. To learn more about soundproofing your home, business, studio or any space you can think of, contact us today or browse our store and start your project.