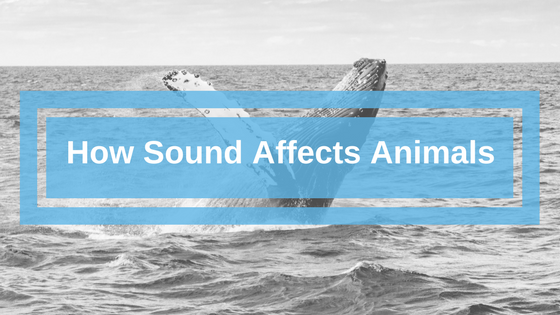 We know noise can negatively affect humans, but can sound harm animals? Pet owners know how sounds, such as thunder during a storm, can affect their pets. It’s more than natural noises that affect animals though. Science now shows that in addition to humans, noise pollution also influences animals.  Find out more about how animals are responding to sound below.

How Marine Animals React to Sound

Noise pollution studies on animals have concentrated on marine animals, such as whales and dolphins. What researchers have found is that human-induced noises are impacting how these social creatures communicate with one another and their group behavior.

Non-natural noises that affect animals residing in the deep blue sea include:

North Atlantic right whales, which are endangered, are significantly impacted by ship traffic because they favor coastal waters along Georgia and Florida, which have high levels of shipping traffic. Studies show these whales’ foraging and vocal behavior, as well as that of dolphins and porpoises, are affected by boat noise.

Hearing loss is another symptom that researchers believe results from human-induced noises. In half of all stranded dolphin cases in the U.S., hearing loss was a factor.

As demonstrated in the above research, sound can harm animals. It’s affected their communication with one another and their behavior, which, in many instances, has led to their deaths or becoming separated from their pods.

How Flying and Land Animals React to Sound

Studies on birds, show their behavior changes in response to noise pollution from cities and traffic. Birds like European robins change their singing periods, choosing to chirp during quieter times at night rather than the daytime.

Instead of adjusting their singing times, certain species of birds change their behavior by singing at a higher pitch. Using a higher pitch, or chirping at a greater frequency, prevent mating calls from being masked by noise pollution.

Outside of the avian realm, other studies on sound and animals include the following critters:

Research on prairie dogs found that noise can harm them by reducing their foraging efforts and increasing their vigilant behavior in response to traffic noise. Limited efforts for finding food can have a significant impact the population health of prairie dogs, especially when combined with habitat loss as more land becomes developed.

Sound also affects the foraging efforts of bats. Researchers found that Daubenton’s bats decreased in foraging efficiency when near human-induced noise because it created an avoidance response. So, instead of going out to hunt, bats were discouraged.

Two decades worth of research on frogs and invertebrates also concluded that animals react to sound through behavior changes. In the cases of the frogs and insects, they mimicked great tits by changing their approach to communication.

Bats and prairie dogs also experienced a shift in foraging and vigilant behavior. These behavior changes even impacted the structure of their ecological communities, indicating a single behavior change has far-reaching consequences for numerous land animals.

Hear the Latest on Sound and Animals

Understanding the full impact of noise on animals and how they react to sound, is an ongoing effort led by researchers across the world. It’s clear that human-induced noise can harm the world’s critters and cause significant shifts in their communities.

If you want to hear about the latest news and research on this topic, subscribe to our Bull Bulletin. We’re always sharing updates on noise pollution and soundproofing techniques to spare you and your pet’s ears from harmful sounds.

How to Soundproof a Dog Kennel

How to Soundproof a Chicken Coop